A superstition is a faith in something that is not advocated by reason or proof.
That means that people believe in something very strongly without any scientific evidence.

Some of the Indian superstitious beliefs are brought down from generation to generation and every generation reacts the same way in their context.

The greater part of these convictions aims to provide security from fiendish spirits, while some lay an indication towards good luck.

Even though Indian culture is progressing at a very fast pace, the majority of the Indian population keep their tasks in line with these beliefs and act accordingly as these superstitious beliefs predict the individual’s future which can be either positive or negative.

Some of the most common superstitious beliefs prevailing in Indian society along with the roots from where they began/arose and the kind of effect they are believed to bring to people’s lives, vis a vis, positive effect or negative effect are discussed in the sections ahead.

If a black cat crosses your way, it will bring misfortune

It is believed that when you are moving around somewhere either by walking or through a vehicle and a black cat crosses your path, then you should either stop at that particular place for some time or you should turn around and go back.

The reason behind this is that it is considered that your journey won’t be successful and misfortune would enter your life.

This phenomenon was initially originated in the Egyptian culture who believed that witchcraft and the witches shift into the body of a black cat.

It was considered a crime in the community if someone was found taking care of black cats and was severely punished.

This superstition entered the Indian community through word of mouth at the time of Kingdom come and colonization and is strongly prevalent since then. 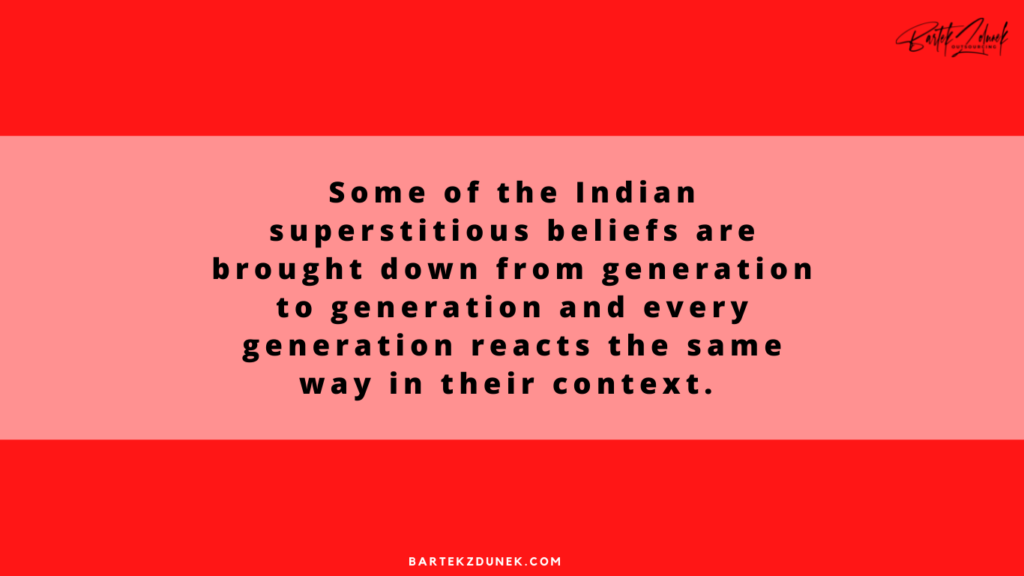 Hanging lemon and green chilies on the entrance doors

It is believed that hanging lemon and 7 green chilies at the entrance door of a house or shop would protect the owner from misfortune and loss.

According to Hindu mythology where Lakshmi(the goddess of wealth) is welcome and worshipped in every house, but its twin sister, Alakshmi (Goddess of misfortune) is liked to stay away from the houses.

It is believed that Alakshmi likes sour, salty and spicy foods and when she comes to your place, she gets her food at the entrance door and so she go back eating that food and satisfying herself.

Lemon was and still is used with water as it helps in keeping a person hydrated because of high vitamin C content present in it. Green chilies were used to check the extent of poison in the body of a person who was bitten by a snake.

But over time, this theory got converted into the superstition of keeping the bad omen away from oneself.

Removal of the evil eye superstition

One of the most common superstitions prevalent in South Indian society is that of the evil eye.

It is believed that any person who looks at another person with the feeling of jealousy may cause evil eye effect on the victim. This is usually associated with children and young animals.

It is believed that with the effect of the evil eye, the victim may suffer from minor misfortune or some serious health issues which may even lead to death.

Several methods are used for the removal of an evil eye effect such as a black mark is made on the face of the child or keeping salt in a bowl in some corner of the house is believed to reduce the effect of the evil eye.

Other methods to reduce the ill effects of the evil eye include rotating coconut or red chili around the face and burning it up.

The superstition of Gifting an odd-numbered amount

The exchange of monetary gifts is very common in Indian society. But, this monetary gift is given in odd-numbered value alone. Usually, a rupee is added to the total amount to make the amount odd.

For example, if someone is gifting Rs. 500 to someone, he would rather like to gift Rs. 501 as this will make the amount indivisible,i.e. it couldn’t be divided by any number.

Usually, this type of gift is given to the newly married couple with a thought that they won’t be parted ever just like the money they are giving.

If this one rupee is not added and an even-numbered sum is gifted, it is believed that it would bring bad luck to the people as it can be divided. And, in the same way, the couple may also be parted in the future.

This superstitious theory arose decades ago when a woman was known to nor having a bank account neither living a luxurious life but she never falls short when it came to giving money to someone. 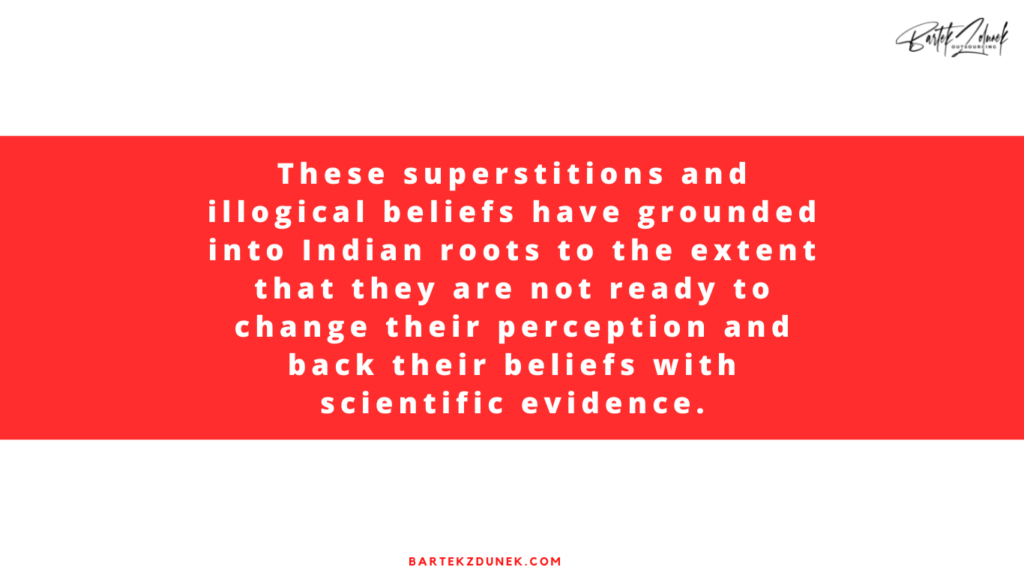 People in the Indian community strongly believe that it is unfavorable to trim hair and nails on certain days of the week.

For example, cutting nails, hair or washing hair on Monday would bring brain-related issues such as anxiety or trauma and cutting nails and hair on Tuesday is associated with bringing bad health in children.

It is also considered inauspicious to cut the nails and hair on Saturday since it infuriates planet Saturn (Shani), which at that point brings misfortune.

Also, one must not cut one’s nails after dusk. The beginning of this conviction could be that in clearing the nails in the dark when there was no electricity, one may also throw small items which could be important for the person.

But with time, this became a superstition to not cut nails during the night and is followed blindly by Indian society.

Superstitions behind the occurrence of solar and lunar eclipse

Another very common superstition that prevails in Indian society is that of the occurrence of the solar and the lunar eclipse.

According to Hindu mythology, there are a lot of rules that one should strictly follow and strictly avoid at the time of the eclipse.

Both solar and lunar eclipses are considered a bad omen harming the lives of people. The quoted reason behind this belief is that both the sun and the moon are considered a powerful source of energy and when these are obscured by something, they consider it inauspicious.

Both solar and lunar eclipses come with several dos and don’ts. For example, people are prohibited to watch the eclipse with the naked eye with a feeling that it would lead to a negative impact on the eye health of the viewer.

Another very bizarre belief behind the occurrence of an eclipse is that a pregnant lady should not move at all during an eclipse and should lie down straight. If she moves around, eat or drink something, it is considered that her baby would suffer and any kind of physical or mental ailment could make the upcoming baby suffer for the rest of his life.

Another belief behind the occurrence of an eclipse is that if a person is injured at the time of the eclipse, it will take more than the usual time to heel. It is also considered auspicious to take a bath right after an eclipse ends.

Superstitions related to menstruation in India

Menstruation is considered as a matter of shame in many parts of Indian rural and urban areas. It is believed that menstruating women in impure and unhygienic and is prohibited to do several tasks that she does in her routine life.

The superstitions behind menstruation date back to the Vedic period. The reason for which superstition arose in Indian society was that the painkillers like ‘meftal’ were not available in the Indian market till the 20th century and the menstruating women were offered adequate rest during the time.

But with time, this phenomenon was turned into an ugly superstition making women uncomfortable during the period.

In many parts of the country today, women are not allowed to enter the kitchen or the prayer room believing that they would contaminate the places and the food.

In some of the Indian culture, women bury the clothes used during menstruation believing that if they are left unburied, they would be used by evil spirits that may cause them severe harm.

To conclude, technological advancement and superstitious beliefs and myths go hand-in-hand in Indian society. Both educated and uneducated people from both urban and rural areas can be found in believing one or more superstitions for which they have no scientific explanation.

But these superstitions and illogical beliefs have grounded into their roots to the extent that they are not ready to change their perception and back their beliefs with scientific evidence.

Wow, these are amazing insights about Indian cultural myths and superstitions.
I got goosebumps while reading them.

Belief is not based on human reason or scientific knowledge, but is connected with conservative thoughts.
India needs to work on that.

The country superstitions and beliefs are quite rampant.

Sounding bizarre to me, but still wants to explore the country

I wonder do well-educated Indians also follow these superstitions quite blindly?

0
Reply
Employees for $2 an hour!
Sign up for free online training!

Get A Quote
Get A Quote
We use cookies on our website to give you the most relevant experience by remembering your preferences and repeat visits. By clicking “Accept All”, you consent to the use of ALL the cookies. However, you may visit "Cookie Settings" to provide a controlled consent.
Cookie SettingsAccept All
Manage consent

This website uses cookies to improve your experience while you navigate through the website. Out of these, the cookies that are categorized as necessary are stored on your browser as they are essential for the working of basic functionalities of the website. We also use third-party cookies that help us analyze and understand how you use this website. These cookies will be stored in your browser only with your consent. You also have the option to opt-out of these cookies. But opting out of some of these cookies may affect your browsing experience.
Necessary Always Enabled
Necessary cookies are absolutely essential for the website to function properly. These cookies ensure basic functionalities and security features of the website, anonymously.
Functional
Functional cookies help to perform certain functionalities like sharing the content of the website on social media platforms, collect feedbacks, and other third-party features.
Performance
Performance cookies are used to understand and analyze the key performance indexes of the website which helps in delivering a better user experience for the visitors.
Analytics
Analytical cookies are used to understand how visitors interact with the website. These cookies help provide information on metrics the number of visitors, bounce rate, traffic source, etc.
Advertisement
Advertisement cookies are used to provide visitors with relevant ads and marketing campaigns. These cookies track visitors across websites and collect information to provide customized ads.
Others
Other uncategorized cookies are those that are being analyzed and have not been classified into a category as yet.
SAVE & ACCEPT
wpDiscuz
5
0
Would love your thoughts, please comment.x
()
x
| Reply